Towards the end of March, a report emerged claiming that Arsenal were interested in Sassuolo’s Gianluca Scamacca.

It was said the Gunners had knocked at the door for the Italian striker, which made a lot of sense considering their current situation.

Losing Pierre-Emerick Aubameyang in January to a free transfer and taking into account Alexandre Lacazette’s current contractual situation, a new goalscorer will be needed in the summer at the Emirates.

Arsenal tried to address that in the last window, going after Dusan Vlahovic, only to see him decide to go to Juventus instead.

That’s why other names are now circulating, with Scamacca seemingly one of them.

In fact, Arsenal aren’t the only Premier League side to be interested in him, if Sassuolo chairman Giovanni Carnevali is to be believed. 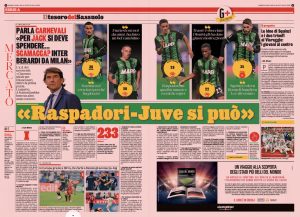 Speaking to Gazzetta dello Sport about where some of his current crop could end up, the Serie A boss touched on Scamacca’s future when asked if it would be an Milan derby for his signing.

He said: “Inter have manifested their interest, but beware of abroad: Gianluca has so many offers, even from the Premier League, but he needs to grow some more and maybe needs to stay another year here with us.”

It’s not explicitly said if Arsenal are one of those, but it really wouldn’t be surprising if they were, considering their needs, desires and past reports.