Even before joining Real Madrid from Tottenham Hotspur in 2013, Gareth Bale has been regularly linked with a move to Manchester United.

Tuesday’s edition of Spanish newspaper AS takes a look at one opportunity provided to the Red Devils to secure the services of the former Southampton man in 2017.

This was the time when the Champions League winners were chasing Kylian Mbappe, who was then at AS Monaco. The transfer fee was valued to be around €200m.

However, the deal never took shape because reports then indicated the World Cup winner demanded €12m net in wages.

Mbappe moved to Paris Saint-Germain on loan that same summer and the transfer was made permanent before the start of the current campaign.

AS now claims that the main reason why Real Madrid did not sign Mbappe in 2017 is because Los Blancos president Florentino Pérez ‘did not dare’ to sell the Wales international to United. 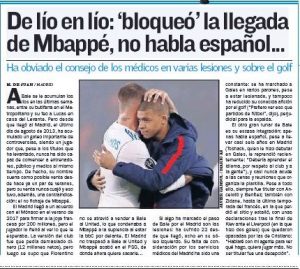 Perez and Madrid were not willing to sell Bale to United and blocked his exit, while Mbappe ended up at PSG.

The La Liga giants are now looking at the Frenchman to strengthen their attack for the next season.

The problem is, we doubt there will be any interest from United in Bale this time around.