Trabzonspor president Ahmet Agaoglu has spoken to Fanatik with regards to signing Stoke City midfielder Badou Ndiaye, who has been linked with a move to the Super Lig side in recent weeks.

Last weekend the 29 year old was pictured with his agent flying to Turkey for transfer talks.

Subsequently there’s been constant reports in the Turkish press about the Stoke City player’s move back to Turkey after his loan spell with Galatasaray last season.

Speaking about Ndiaye, Agaoglu confirmed they are interested in signing the Senegalese midfielder, but they didn’t ask him to come to Turkey: “Yes, Ndiaye is on our agenda but we are not the ones who called him to Turkey. Maybe he has other things to do, maybe he is talking with other clubs.

“I don’t know. I can’t say anything about this transfer at the moment because nothing is decided.”

Earlier this week we covered reports from the the Turkish press that Trabzonspor want to sign the Stoke City man until the end of the season, but Agaoglu has been quick to dismiss those claims. 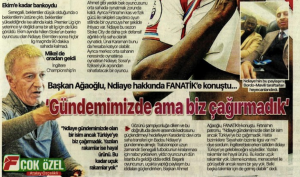 Ndiaye, who previously played for Galatasaray and Osmanlispor, now seems set for a return to the Super Lig.

The player was part of the Gala squad which won last season’s league title.

He’s made 13 appearances for the Potters this season and is under contract with the Championship club until June 2022.