For those who don’t know, Pantaleo Corvino, other than having a name that sounds like it came straight out of the Godfather series, is the chief executive officer at Fiorentina.

Overseeing all the transfer operations, the 69-year-old has a lot of experience in the role, knowing when and when not to accept big offers for his players, which he’s had to do a lot ecently.

Speaking to Gazzetta dello Sport, Corvino was asked about this, and, in the process, revealed a few of the bids he had turned away for some the club’s stars this season, including one from Old Trafford.

He said: “We rejected great offers from Lyon for Veretout, from Marseille for Simeone and from Manchester United for Nikola Milenkovic. De Laurentiis pressed for Chiesa. This is the right way to grow.” 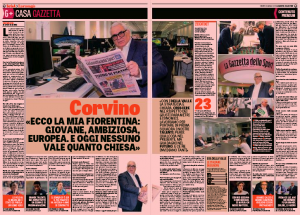 Back in October, there was talk of the Red Devils making a €60m offer for the versatile defender, with José Mourinho said to be a big fan of the 21-year-old.

However, there was some speculation regarding the authenticity of this claim, with some sources stating it was just ‘rumours’.

Now, it seems, we have confirmation, although when the bid was made remains a mystery, but we’re going to guess towards the end of the summer transfer window when Ed Woodward was haplessly flapping around for a centre-back.