AMK Spor state Besiktas manager Senol Gunes is keen to make some reinforcements in attack with Vagner Love, Alvaro Negredo and Jeremain Lens all expected to leave the club this summer.

The Turkish newspaper claim Besiktas’ transfer committee have identified the Swansea City star as a target and Gunes has given the green light to sign the Ghanaian international.

Besiktas president Fikret Orman will reportedly meet with Swansea City officials in the coming weeks, say AMK Spor, and the Turkish club are looking to loan Ayew, with a right of redemption. 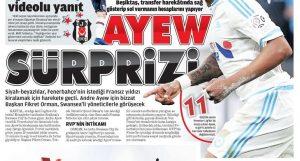 yew returned to Swansea City in January, in a deal worth around £20m, following a disappointing spell at West Ham. After the Welsh club’s relegation to the Championship the player may be looking to move on.

The 28 year old still has three years left on his Swansea City contract.