Home Championship Club change their mind regarding Watford target – Would sell him for...
SHARE

They have a story explaining that Sporting’s intention hadn’t been to sell the player, as at the end of their campaign, they told him he’d stay in Ruben Amorim’s squad for next season.

However, they’ve now been changing their mind, since there could soon be the possibility of a deal they can’t refuse, with the winger leaving the club for around €20m.

Record writes that several sides have started talks with Sporting for the move. Among those interested, are Watford and clubs from Serie A. 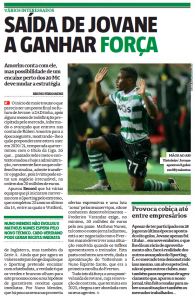 Other players who could leave Sporting this summer are Nuno Mendes and Matheus Nunes. But since no offers have arrived for the fullback, and the midfielder’s move to Everton isn’t on the verge of happening, Jovane is the one whose sale could give the Lions some immediate money.

Watford’s interest in the winger had first been reported by the English press, and even though the Portuguese media have been showing that the Lions are open to negotiate, we’re still to see strong reports regarding the Hornets’ efforts to land the 23-year-old.