Shipped out to Monaco on a season-long loan with an option to buy, Islam Slimani might not be a Leicester City player for much longer.

With calls already emanating from France for the principality club to already trigger the clause to keep him around beyond the current campaign after his great start, doing so shouldn’t be too much of a problem for the Ligue 1 side.

That’s because, according to France Football, the price Leicester set for their once record signing is only €10m, which the magazine describe as a ‘present’.

It’s easy to see why they think that, too, as the Algeria international has scored four goals and assisted his teammates four times in his first five games of the season, with his performances growing by the week.

Already key in the 3-1 win over Nice, Slimani produced a masterful display on Saturday against Stade Brestois 29, as he scored one and assisted the other three goals in a 4-1 home win over the newly promoted side. 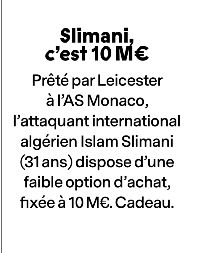 He set up Wissam Ben Yedder, Gelson Martins and Keita Baldé, and is showing why he was once so talked about on the European scene before moving to Leicester and being pushed to one side after Claudio Ranieri’s dismissal from the King Power Stadium.

Then again, it seems Brendan Rodgers and co. are doing just fine without him these days, so perhaps all this is best for everyone involved.