With European football back in our lives, players are giving interviews left, right and centre, as clubs like Cercle Brugge prepare themselves to face titans like Manchester United.

The Red Devils failed to make the top four last year, meaning they had to make do with the Europa League this year, and the Belgian side will be their first knockout fixture of the competition after topping their group earlier on in the campaign.

Over in Belgium, there is one man who is looking forward to the clash, and that’s Krépin Diatta, the 20-year-old winger with seven goals and four assists in 31 appearances this season.

Why? Because he knows Ole Gunnar Solskjaer.

Speaking to Sport/Foot in Belgium, he said: “I know him well. He managed Molde when I had a test there at the age of 16. He’s a good manager because he wanted to keep me (laughs), but the rules stopped him: I wasn’t old enough to sign a contract.

“I have no idea if he’ll recognise me, but I hope and think so. If I can, I’ll go say hi and talk to him about Molde, where they love him”.

That’s not the only connection the player has to Manchester United, as the youngster admitted the Old Trafford side have also taken an interest in him in the past. 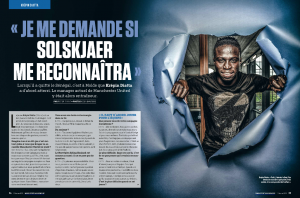 He added: “They came to see me in Norway (when he was at Sarpsborg 08) a number of times, but they never offered me a contract because I wouldn’t have got a work permit. Either way, it was too soon and it was to play in their reserves”.

The winger continued by revealing that after the 2017 U20 World Cup in Korea, he received a number of offers from big clubs like Atlético Madrid and Borussia Dortmund, but, again, they were for youth teams.

Instead, he didn’t want to burn steps in his career and wanted to find a club that would give him first-team football.

This is what Brugge offered, and he’s happy there.