Nabil Bentaleb has had an up and down time since moving from Tottenham to Schalke. Unable to find the prominence he wanted under Mauricio Pochettino, Bentaleb was clearly becoming frustrated with his role, or lack of it, at Spurs.

Seeing other young players like Eric Dier and Dele Alli go ahead of him, Bentaleb knew his days as a great Tottenham hope were pretty much over, and it seemed Pochettino very much agreed with that.

Moving to Schalke, Bentaleb initially went on loan, the midfielder’s deal was then made permanent for €19m. At one time he was doing so well he was linked with a move to Europe’s biggest clubs, but as with everything at Schalke, things have been all over the place. 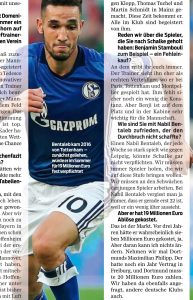 Speaking to Germany’s SportBild, Schalke general manager Christian Heidel was asked about signing the player from Tottenham for €19m: “With Bentaleb you always forget that he is just 22, because he looks a little older.

“This is the market. He would probably cost €7m three years ago, yes. But I cannot help it.”