For quite some time there’s been an assumption Jesus Navas will return to Sevilla at the end of his Manchester City contract. Sevilla would be welcoming an old hero back and Navas, now 31 years of age, would get the chance to see out his career in his sunny Andalusia home.

This week Sevilla president Jose Castro made it clear Navas is on the agenda, quoted by Marca as saying: “In the sports management we’re working with many names and Navas can be one of them.”

Estadio Deportivo follow that up by reporting contacts have been initiated, both formal and informal, to get Navas back to Sevilla.

Sevilla could have secured Navas at the close of the winter market. Yet, according to the months of 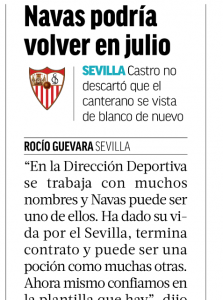 coverage, they haven’t even made a firm offer yet.

It could be part of a plan to talk down the player’s value, in relation to his salary. Sevilla are never going to get anywhere near to what Manchester City pay, so it’s a question of just how much Navas gives up.

The longer the situation drags on, the more Navas gets used to the idea he’s going home, the lower Sevilla will think they can go in.