Torino’s Europa League clash against Wolverhampton Wanderers is getting some huge attention from the Turin media.

This Wednesday, newspaper Tuttosport brings three pages with special stories about the match, which is being played in Italy tomorrow.

And after presenting Wolves’ team, the outlet shows some big concern with the refereeing, since UEFA chose a Portuguese official for this game.

Tuttosport points out the amount of Portuguese people in Wolves’ squad. They say it’s a total of 12 professionals, including players and staff. 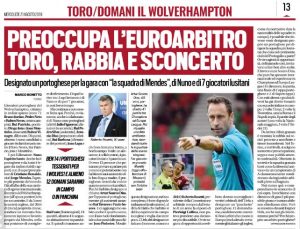 The story says UEFA should have been advised about this, especially because there are too many good referees in Europe for them to specifically pick a Portuguese one.

Torino fans have been showing their unhappiness on social media, and the newspaper says that although the club haven’t said anything public, there’s indeed some ‘bewilderment and concern’.

To finish their story, Tuttosport says that if they had UEFA in front of them, they would just ask: ‘Why?’.