Mundo Deportivo somewhat contradict themselves in their Sunday edition. The Catalan newspaper again talks of a debate at Barcelona over whether to sign Georginio Wijnaldum or Thiago Alcantara.

The Liverpool player has been strongly linked with Barcelona ever since it was known Ronald Koeman would be taking over at the Camp Nou.

Given his contract expires in less than a year, he’s seen as a player who would be good value and able to fit straight into the team.

On Thiago, Mundo explain the player is still thought highly of, despite his exit to Bayern Munich.

However, they also say his move to Liverpool is now ‘advanced’, and therefore Barca don’t really have much hope even if they make a move. 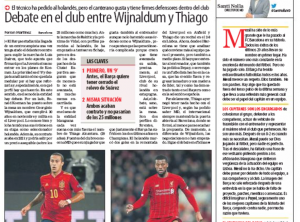 Thiago would always listen to a Barca proposal, yet there’s not a lot of confidence on this from the Catalan newspaper.

That brings it back to Wijnaldum, and whilst there’s been some contact the deal isn’t considered to yet be on track.

Club’s struggles forcing them to ‘accelerate contacts’ with Man City for...