A piece from Italian newspaper Tuttosport today says Inter Milan are planning some moves for the January window, and a Manchester United player is one of the names on the list.

Manager Antonio Conte is looking for a few players who he’s managed before. These are mainly Arturo Vidal and Olivier Giroud.

But the Barcelona star is set to be a difficult man to sign, and that’s why as an alternative, the Nerazzurri have Manchester United midfielder Nemanja Matic.

Tuttosport points out that the player has been benched at the Red Devils, while Inter Milan could offer him a place in the Champions League. 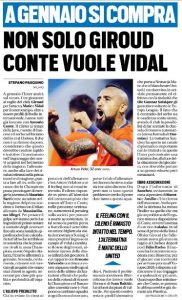 The newspaper claims that since the negotiations for the transfer of Alexis Sanchez, there’s been a good relationship between Manchester United and Inter Milan, and the Nerazzurri shouldn’t need to make a big effort for Matic to move.

Although Matic’s contract expires at the end of the season, Manchester United have an option to extend it for a further year.

That’s why Inter are aware they are not getting him for free.