Everton signed Andre Gomes on loan from Barcelona last summer and an injury forced him to wait until October to make his debut for the Toffees.

Since then, the Portugal international has made 15 appearances and with some impressive displays for the Merseyside club, he’ll have suitors in the summer, once he returns to Camp Nou after his loan deal.

This is because the Premier League outfit don’t have the option to make the 25-year-old’s transfer permanent as a part of the temporary deal.

Tuesday’s edition of Catalan newspaper Sport looks at Barca players who can be sold after the end of the season and this is when Gomes gets a mention.

It is claimed the Blaugrana believe there’s ‘very good prospects’ the former Valencia man will be sold for a reasonable fee in the summer. 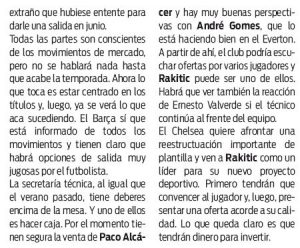 For Gomes, as of now, looks the club likeliest to make an effort for a permanent transfer.

There’s no mention of any talks or contact regarding that.