Emerson Palmieri is a target for Inter.

We know, it really isn’t news, but when Gazzetta dello Sport put as much effort into the story as they have on Friday, we kind of have to relay it, mostly because there’s actually a bit of detail in it for once.

It all stems from the talks both Chelsea and Inter had over the extension of Victor Moses’ loan, as the Italian side decided to use the opportunity to enquire about the left-back.

Gazzetta state Inter, ‘over the past few days’, have ‘informed themselves’ with the Premier League club, and have found out a deal ‘is within reach’.

Chelsea, if they are to let Emerson go, want a ‘definitive solution’, and Inter ‘aren’t excluding’ a loan with a view to buy for a package worth less than €30m. 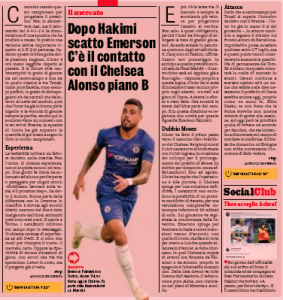 It’s revealed the left-back is ‘pushing’ for a return to Italy, and ‘his intentions’ are in line with those of Antonio Conte.

If Chelsea and Inter can’t find an agreement on Emerson, then there’s always Marcos Alonso, who is described as the ‘number one alternative’.