Ever since Paul Pogba packed his bags and left Manchester United for Juventus, young talents in England coming to the end of their contract have been linked to the Turin club.

It’s usually something of a sign when the claims start from outside of Italy, as they almost always do.

That’s been the case with West Brom’s Nathan Ferguson over the past few days. Given that he’s been linked with a number of clubs both inside and outside of England, it’s clear the claims aren’t coming from those clubs involved.

That would also be backed up by it not getting a great deal of coverage in the media closest to those European sides. There’s been no strong independent claims in Spain about Atletico Madrid interest, or in France about Marseille interest.

Therefore, if it’s not coming from interested parties, and not coming from West Brom, the option left is the player’s camp, whether directly or indirectly. For whatever reason, someone is pushing the story.

Tuttosport take a look at the situation today, given the reported Juventus interest. The Turin newspaper don’t claim to have any inside line, which would be unusual given how much they cover potential Juve business. 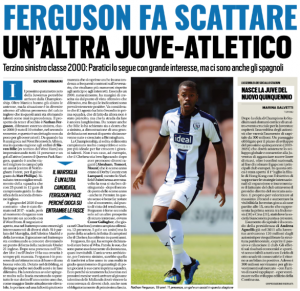 The article concentrates on explaining Ferguson as a player for an Italian audience, and ends by stating the Serie A champions would have a barrier in the way of signing him.

With the youngster at a key point in his career, first team football is key… and it’s very unlikely he’d be getting that at Juve.

“If it avoids problems next year, has to be done” – Manchester City star calls for season cancellation if needed