Three days ago, Mundo Deportivo explained Marco Silva has urged his employer to make an effort in signing Andre Gomes.

It was also explained Everton sporting director Marcel Brands has ‘opened contacts’ with Barcelona’s leaders for the midfielder’s transfer.

Tuesday’s edition of the same newspaper takes a look at those players who could be sold in the summer and claims the most advanced negotiation seems to be in the case of the former Valencia man.

It is claimed there is a ‘persistent interest’ from the Toffees in signing the Portugal international.

The Merseyside club are also aware of the La Liga winners’ urgency to part ways with the 25-year-old and the Spanish champions are demanding at least €25m for him, especially after spending €35m in securing his services in 2016. 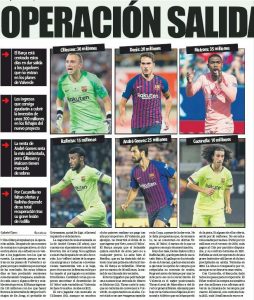 Gomes’ contract at the Camp Nou runs down in 2021.

Whether or not Everton will be able to convince Ernesto Valverde’s side and the player remains to be seen.