The defender’s current deal runs down in 2022 and it includes an annual salary of €5-5.5m net.

Los Blancos have a desire to retain him and offered him a new deal that includes a net annual salary of €7m, which is €5m short of the demands made by the 28-year-old.

ABC’s claims are relayed in today’s edition of Mundo Deportivo and the Spanish newspaper provides additional information on this case.

The salary difference is the ‘main discrepancy’ between the La Liga side and the France international. The centre-back considers Real Madrid’s proposal insufficient, taking into account his performances and role within the team.

Varane, until now, has been ‘silent’ and hasn’t responded to the Spanish club’s renewal offer. Carlo Ancelotti’s side are ‘hoping to get a response’ when he returns to pre-season training next week.

Real Madrid’s objective is to know ‘first hand the intentions of the player’ and they want to place him in the market, if he decides against signing a new contract. 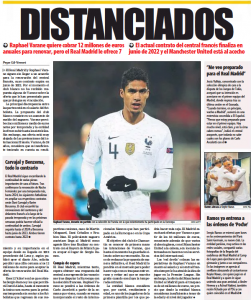 Ancelotti’s side are aware Manchester United are the ‘most interested’ club in taking over Varane’s services.

The Old Trafford club can ‘fulfil’ the Frenchman’s expectations salary wise and he has always been attracted to the idea of playing in the Premier League.

Real Madrid are ready to listen to offers starting from €50m, but they deem the €45m offer from Ole Gunnar Solskjaer’s side as ‘insufficient’, considering ‘age and level of the player’.