As Benfica continue to chase Liverpool left-back Alberto Moreno, the Portuguese side reportedly know how much they need to spend to take him from Anfield.

According to newspaper A Bola today, the player is not renewing his contract with the Reds, and wants a long contract, ‘of four or five years’, making €3m net per season.

Benfica know that’s a lot of money for them, but still, club president Luís Felipe Vieira considers the deal to be ‘possible’.

Before going for Moreno, the Eagles would be selling Alex Grimaldo. They’ve promised the player they will let him go in case an offer of over €30m arrives. 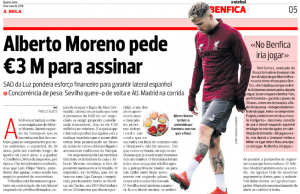 But of course there’s some competition for Moreno.

Barcelona are the first to get a mention, although he’s said not to be keen on the move, since he would sit on the bench like he’s been doing at Liverpool. A return to Sevilla is something that ‘seduces’ him, while Atletico Madrid are said to be in the race too.

That’s why Benfica are pretty aware they will have to make some heavy investment to convince Moreno to move to Lisbon.