Otavio potentially moving to Liverpool this summer is a story which continues to rumble on in the Portuguese media.

Over the past few days there’s been various reports about the Reds making a move for the player, with there even being claims of an offer arriving from Anfield.

FC Porto had Marko Grujic on loan from the Premier League club last season, and they’d like to have him for the next campaign too. That saw claims that Grujic could be used to help Liverpool sign Otavio.

Porto have been against this, hoping that even if the two moves happen, they would be counted separately, and such a scenario would help their accounts. Tuesday saw claims that Liverpool were insisting on Grujic being part of a move for Otavio.

Wednesday’s edition of A Bola says Porto ‘await an attack’ from Liverpool for the signing, and they believe it may come today.

Otavio has an exit clause of €40m, which several Portuguese newspaper say rises to €60m at the beginning of July. On top of that, Porto’s financial year ends today, and a big 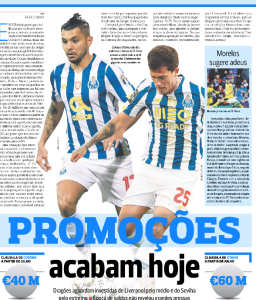 chunk of money would be welcome.

A Bola states ‘promotions end today’, presenting it as the last chance for Liverpool to do a deal at €40m.

It’s worth noting that in the midst of all the claims saying the clause rises tomorrow, there was one report which put the date as July 15th.