The Marseille press simply cannot get enough of Mattéo Guendouzi these days.

Praising him after both his performances against Lokomotiv Moscow and Rennes, La Provence are back at it again with a whole article dedicated to the Arsenal loanee.

Sent to the south of France due to his falling out with Mikel Arteta, the midfielder isn’t really expected to return to the Emirates in the near future, and the newspaper explain why.

It’s state Marseille have an ‘automatic option to buy of €11m’, although they do not explain what would trigger it, but it could simply be European qualification or a number of appearances made for the first-team.

That might filter through down the line, but what is apparent is how quickly the Arsenal man has settled in the south of France, and his connection with Jorge Sampaoli and what the manager expects of him has been instantaneous. 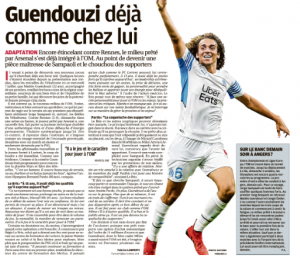 This is why, according to La Provence, Guendouzi ‘imagines himself staying in the Provence region for many seasons’.

Not only that, but his brother, Milan, also joined Marseille this summer, transferring from GSI Pontivy to the club’s B team back in mid July, nine days after his brother was signed on loan from Arsenal.

If that isn’t an intent from the Ligue 1 side to convince him they are serious about making him their star, we don’t know what is.