On Saturday, we covered claims from Spain around Tottenham’s efforts to sign Giovani Lo Celso from Real Betis.

The story looked strong, carried by AS and Diario de Sevilla, and it was easy to assume the information was coming from Betis themselves.

It had already been claimed Spurs made their willingness to pay €60m known, something Betis made clear isn’t enough.

Lo Celso has a €100m buyout clause, and 20% of the total of any transfer fee has to be given to PSG.

Therefore, they’d want Tottenham to provide them with €60-65m ‘clean’.

That would be a huge fee.

For example, should Spurs pay €80m then Betis would receive €64m. They’re asking for 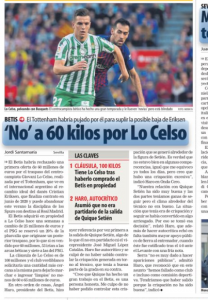 too much, the player isn’t worth such a fee at this stage and it’s unlikely a club would pay that.

The bargaining stance will see negotiations get tense with Tottenham, who certainly won’t want to pay over the odds. A €60m offer seemed reasonable, €65m is likely where they should stop.

Of course, that’s if these claims are correct.