As Portuguese side Sporting work on the permanent signing of Pedro Porro from Manchester City, we get two versions of this story coming from the Portuguese media today.

Loaned by the Premier League side to the Lions until the end of next season, the right-back can now be bought on an €8.5m at any time before the temporary deal expires in 2022.

Starting with A Bola, the Portuguese newspaper write that Sporting are only waiting for the confirmation of their place in the Champions League’s group stage before triggering the buying option for Porro.

With the player happy in Lisbon, he is expected to agree to a five-year contract with the Lions, being tied to the club until 2026.

Manchester City, however, would also have the option to sign him back, with A Bola learning they typically negotiate it to be twice the amount of the original purchase option, meaning it would cost them €17m to bring him back to England.

Now we get a slightly different version from O Jogo, who claims Sporting have already told Manchester City that they’re signing Porro permanently. 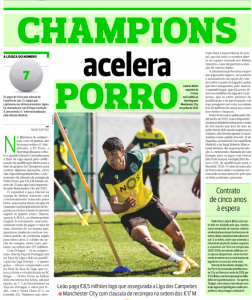 The newspaper state the fullback is being chased by several clubs, which is why the Lions want to work fast and protect him with a five-year deal.

In Lisbon, Porro should have a release clause of €60m, which is bigger than defenders usually get at the club.

O Jogo also goes against A Bola in saying Manchester City have no option to buy him back from Sporting, meaning any attempt to bring him to England again would require fresh negotiations.