Home Europe Tottenham have made offer ‘this summer’ for Spaniard, agent is sent strong...
SHARE

After winning three Champions League in a row, Real Madrid endured a difficult campaign during the 2018/19 season and Marco Asensio is one of the players who struggled.

Tottenham Hotspur and Juventus are believed to be interested in acquiring the services of the 23-year-old, if reports are to be believed.

In today’s edition of AS, it’s claimed the Champions League runners-up and the Turin club submitted offers ‘this summer’ to land the forward.

However, Madrid have rejected both.

Los Blancos view the player as non-transferable and Zinedine Zidane counts on him.

Asensio impressed under the Frenchman’s guidance since returning from a loan spell at Espanyol, scoring 10 and 11 goals during the 2016/17 and 2017/18 season respectively.

Last campaign, he netted only six goals in all competitions, out of which only one was in the league. 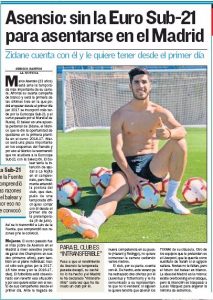 It’s claimed that in response to interest from Tottenham and others, Asensio’s agent has been informed the player can only leave for his €700m buyout clause.