On Wednesday, we covered an interview from Dennis Praet’s agent, who was basically pleading for Leicester City to let them know what their plans are for his client.

The Belgian was sent on loan to Torino for the season, where the midfielder did really well when he wasn’t injured.

However, his fitness issues led to the Serie A side to try alternative ways in order to keep him rather than spend the €15m that were pre-agreed with Leicester in the initial loan.

In the meantime, clubs such as Napoli have started sniffing around, but Tuttosport in Italy believe Praet would rather stay where he currently is.

They explain the player ‘is in the mood’ to stay in Turin, where he has ‘found himself well’ working under Ivan Juric. 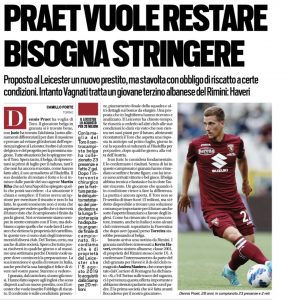 The Leicester player ‘hopes so much to come back in early July’, and he ‘has not yet emptied, as others have done, his locker’ in the dressing room.

In fact, ‘his desire to stay is strong’, and Torino are working on trying to make his wish come true.

It’s said the club have ‘already moved’ and have let Leicester know they ‘are willing to take out a new loan’, with the Premier League club ‘wanting to insert an obligation to buy’.

Leicester have ‘asked for time’ to think about everything on offer from Torino, and if they manage to ‘sell him on their terms to another club’, they will do so, but if they can’t, they will contact the Serie A club again.

Basically, they’ll test the market first, and if they can’t find any suitable buyers, they’ll listen more intently to a second loan to Turin.