Italian giants Juventus may have given up on signing Paul Pogba from Manchester United this summer, but the rumours for 2019 are already out.

In a story about the Old Lady’s transfer plans for the future, Tuttosport names today the French midfielder as one of the club’s main targets.

The newspaper claims that Pogba has been offered ‘with some insistence’ to the Serie A champions in the past few months, and has been exchanging many messages with his former teammates from the Turin club.

Juve did make some approaches to try to get him back this summer, but Manchester United were pretty set on not letting him go, and didn’t open negotiations. 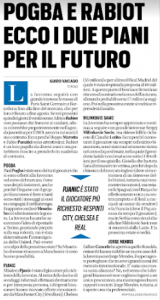 Pogba’s relationshp with Mourinho, however, is said to have ‘deteriorated’, and is something that could change things for the next year. Tuttosport claims that if the manager stays beyond next summer, then there are ‘good chances’ that Juve can bring the midfielder back.