Arsenal’s Héctor Bellerín joined Real Betis on a loan deal last summer after having lost prominence at the Emirates.

The right-back made 28 appearances in all competitions this season and his displays have convinced the La Liga side to retain him. He ‘perfectly meets’ the demands set by Manuel Pellegrini.

That’s according to ABC Sevilla, who state the Spanish club have ‘already expressed’ to the 27-year-old about their ‘intention’ to continue their association with him beyond the loan deal.

The ‘understanding between the parties is total’ as the meetings between the Betis chiefs and the fullback’s agent was ‘satisfactory’.

If the Spaniard were to continue in Seville, it will be through a long-term contract.

In addition to this, everything will also depend on how they will finish the ongoing campaign. Their qualification for the Champions League or the Europa League can be ‘decisive’.

Although the player shown on several occasions his desire to continues, if an agreement materialise with Arsenal, the ‘main hurdle’ for Betis to buy Bellerín is his contract with the Gunners that runs down in 2023.

It remains to be seen whether Arteta’s side are ready to let the defender go out for free in the summer to save on his salary or if will they seek compensation to cut ties with him. 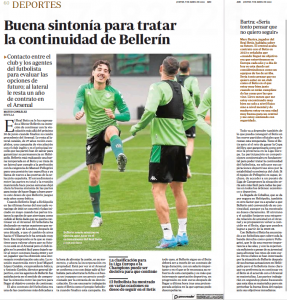 Bellerín made it clear he wanted a move away from the north London club in the past.

The newspaper uses it to suggest his future is no longer at Arsenal.

Despite this, the report says they ‘will not make it easy’ to let him go.