Lyon are set to really kick off their summer transfer business this week, and it could all start with the sale of Tanguy Ndombele to Tottenham Hotspur.

L’Equipe report an agreement has been reached between the French club and Spurs which will see Mauricio Pochettino’s side pay €62m plus a further €10m potentially added in bonuses.

This will help Lyon to move strongly into the market themselves. Not that Jean-Michel Aulas believes they needed any help, bragging recently about the club’s finances.

Monday’s edition of L’Equipe says the Ligue 1 side are looking for a defender, and that leads them to aim ‘primarily’ for Manchester United’s Eric Bailly.

He’s currently out with a knee injury, which is the story of his career at Old Trafford. 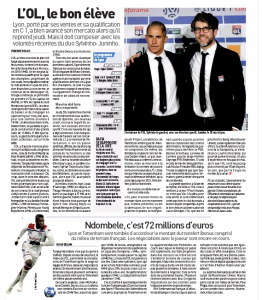 There’s no suggestion of fee, and along with the Manchester United player, Arsenal’s Laurent Koscielny and Sampdoria’s Joachim Andersen are also seen as options.

Should Bailly leave United this summer, then it’s likely Ole Gunnar Solskjaer would want to bring someone in to replace him.