You know what’s better than two transfer stories? Two for the price of one, of course!

That’s very much the feeling of this whole Romelu Lukaku-Paulo Dybala swap story that’s been doing the rounds over the weekend, as Juventus entered the fray for the Belgian after it was getting clearer and clearer that Inter wouldn’t be able to afford him.

In the background, stories started emerging of Manchester United keeping an eye on the Argentine, and the story ended up writing itself.

Gazzetta dello Sport have an article on the matter on Monday, explaining that Juventus see Dybala as a potential makeweight in a deal for Lukaku.

The Serie A champions consider the Belgium international as one of two strikers they can get (the other being Mauro Icardi), and have ‘arrogantly’ positioned themselves in the mix, ‘overtaking’ Inter along the way.

They’ve allegedly spoken to the striker, with whom they are said to have an ‘agreement in principle’, and have already discussed with Manchester United the idea swapping him for Dybala. 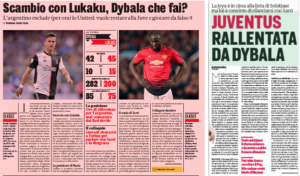 As both clubs value their players at around the same price, it all sounds rather easy, but the fact the 25-year-old has yet to hear from the Red Devils and isn’t thinking of leaving Turin is somewhat problematic.

That’s why next week will be ‘decisive’ when the player returns from his post Copa America holidays, expected to do so on August 5th, but likely turning up this Thursday to start training on Friday.

Dybala is said to have a ‘clear idea’ of what he wants, and is hoping he doesn’t need to meet the board, all the while ‘intrigued’ at playing the false nine, convinced he can ‘do great things’ in a new role next to Cristiano Ronaldo.

If he does end up meeting Fabio Paratici and Pavel Nedved, he’ll tell them what he’s already told them: he wants to stay at Juventus for a long time.

Should he be told they have other plans in mind, however, then he will ‘resign himself to take into consideration the idea of a goodbye’ and the team who want him (Manchester United or whoever else) will have to present him with a very convincing project and an improved contract on his current terms (meaning around €9-10m/year post tax).

It’s much of the same over at Corriere dello Sport, who describe Dybala as being ‘top of the list of those desired by Ole Gunnar Solskjaer’ all the while making it clear the player would much rather stay at Juventus if he can.

They also add there is some ‘resistance’ from his end about playing in England, which he doesn’t seem too keen on.

Either way, it looks like it could all end up being down to Dybala, and these early signs suggest it won’t be an easy task to convince him that moving to the north of England is in his best interests.