Arsenal’s Nacho Monreal is edging closer towards completing a move to Real Sociedad.

Mundo Deportivo reported on Thursday that the Gunners have given the green light to allow the left-back to leave the club, but the deal may only be made official after their clash against Tottenham Hotspur on Sunday.

That’s because Kieran Tierney is sidelined with an injury and Sead Kolašinac only returned to the squad against Burnley and Liverpool, after the latter and Mesut Ozil were attacked earlier this month.

Friday’s edition of Mundo Deportivo once again states the agreement between Real Sociedad and the left-back is total and the two clubs have also agreed a deal for the transfer.

For them, it’s pretty certain that Monreal will join La Real, where he will sign a two-year deal with an option to extend it by a year.

The report again states Emery wants to retain Monreal for the north London derby and the defender is expected to complete the switch after the weekend clash. 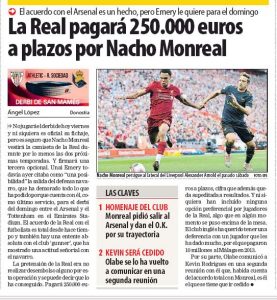 Mundo also provides details of the transfer fee and they state Real Sociedad will ‘pay 250,000 euros in instalments, a figure that is also subject to results.’

‘And they have not even included any preferential option for Real players, something that was once placed on the table.’

That’s because Arsenal wanted to show respect to Monreal for his service over the last six years.