“Everything on Gabriel Jesus”.

That’s how Gazzetta dello Sport see Juventus’ plans going forward as they work out how to revamp their attack, preferably without Cristiano Ronaldo.

The Portuguese superstar has become more of a burden than an asset with his high wages, and while the Serie A side still seem proud to have him at their club, they could also do without him being there to free up space for the Manchester City striker.

That’s why the newspaper explain that Cristiano Ronaldo’s silence ‘doesn’t slow down the work’ to sign Gabriel Jesus.

In fact, they’ve ‘accelerated the contacts’ for the Manchester City in order to anticipate a potential exit from the Portugal international, and ‘day after day’, the feeling is that signing the Brazilian would cover Juventus’ back for years to come in the striker department.

There is now the ‘possibility of signing him on loan without immediate financial obligations’, with those in charge of the Premier League club having sent ‘signals of attention’ regarding the Serie A side’s plans. 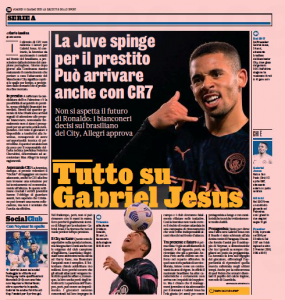 Furthermore, Jesus is ‘open to moving to Juventus, aware of having a technical opportunity of the first order’.

The Italians’ plan is to ‘gear up for tomorrow’ (the future), and see Jesus as being ‘the right age to be a protagonist for a long time and with evidently very flexible technical characteristics’.

As always, a lot depends on what Cristiano Ronaldo ends up doing, and the same can be said for Manchester City, who may or may not succeed in their attempts to lure Harry Kane to the Etihad.

But Juventus ‘cannot remain idle’, and that is why Max Allegri has approved the attempt to bring in the Brazilian, which is proof they ‘don’t want to waste precious time’ if they can avoid it.