On January 16th, Het Laatste Nieuws reported Genk star Mbwana Ally Samatta is ‘on his way’ to England and it was also explained the likes of Aston Villa, Brighton & Hove Albion, Norwich City and West Ham United are interested in him.

There wasn’t any clarity on which club would acquire the striker’s services and that’s now been made clear by today’s edition of Het Nieuwsblad.

It’s claimed the Jupiler Pro League are ‘about to lose’ the Tanzania international to Villa as he’s heading towards the Premier League.

According to the Belgian newspaper, there was no talk of a deal agreed yesterday as Genk wanted more than what Dean Smith’s side were willing to pay.

However, it’s expected two clubs can find an agreement for the 27-year-old’s sale for anywhere between €10-12m. 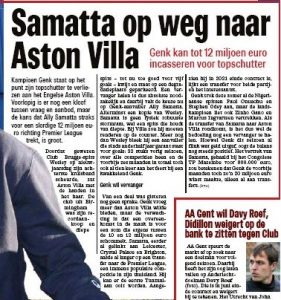 Samata’s contract with Genk expires in 2021 and therefore a move in the winter market seems to be the best solution for both parties.

Aston Villa will be without Wesley Moraes after the Brazilian suffered a serious injury and Samatta will take his place in the squad for the second half of the season.

Meanwhile, HBVL explains the two clubs found an agreement late on Thursday for a fee of around €10.5m.

Samatta will undergo his Villa medial in Paris.