With the €15m purchase clause in the loan taking Lucas Torreira from Arsenal to Fiorentina expiring on May 31st, there is little time left for the Serie A side to keep the Uruguayan.

That’s the angle Corriere dello Sport run with on Monday, explaining that there’s just a couple of days left before finding out whether the midfielder will stay in Florence.

The belief is that ‘intense hours’ are ahead for those involved in the talks, ‘between cross-contacts and wide-ranging telephone calls on the Europe-South America axis’, as well as ‘messages through all possible channels to arrive at the solution’ that would please everyone, especially Fiorentina fans.

The Italian club need to pay €15m to Arsenal, with the Gunners being seemingly fair, ready to ‘accept a payment to be divided into several tranches until 2025’, but those in charge are ‘trying to lower’ it. 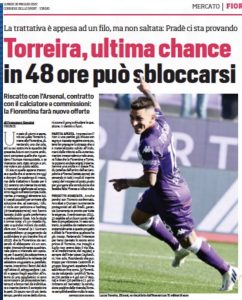 On top of that, ‘there is a contract to be signed at figures that meet the demands of the Uruguayan footballer’, all the while ‘meeting the favours of the club with a view of safeguarding the subtle and often fragile equilibrium in the dressing room’.

Furthermore, there’s a need to consider ‘commissions and various bonuses to be identified and included in the contract between the parties’.

There’s ‘certainly not much time left’, as Corriere dello Sport make it very clear that this is ‘the last chance’ and there’s only 48 hours left to unblock everything.