Arsene Wenger’s future at Arsenal is arguably the biggest football story in England at the moment, and it’s also getting widespread coverage in France. Wenger helped build up the profile of the Premier League in France, and also provided a way in for media in the country.

Arsenal became almost France’s adopted Premier League club thanks to Wenger and a regular procession of his compatriots. The club’s success under Wenger was a source of great pride and so things turning against him brings a certain sadness.

L’Equipe have a feature in their Thursday edition on the manager’s future, and they’ve spoken to one of Wenger’s close friends.

The unnamed, but almost certainly impeccable, source told L’Equipe: “The results are not as expected, the supporters are angry but Arsene is impervious to outside pressure and has the support of the board. His sadness will be immense, the day he leaves Arsenal. It is he who will decide his future. His contract renewal is ready. He only has to sign it. He is aware of some errors, especially in recruitment.” 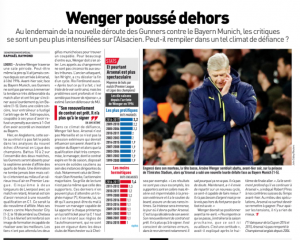 The French newspaper explain that Stan Kroenke is reluctant to change manager because he’s worried it won’t be so easy to find someone who can guarantee Champions League football every year on a budget which isn’t as generous as some others.

Wenger’s ‘immense sadness’ over an Arsenal exit will happen sooner or later, but it seems those in charge at the club would rather it was the latter option.