Marash Kumbulla has impressed with Hellas Verona this season, which has seen the defender linked with a number of clubs.

There’s of course been the usual links to Serie A sides, yet also claims of interest from the Premier League. Everton and Tottenham have been repeatedly linked, with both clubs thought to be looking for a central defender in the summer market.

The 20 year old could represent a relatively good value transfer in the next window, and also be a player whose value has the potential to increase, which would allow for profit at a later date.

Sunday’s edition of Gazzetta dello Sport looks at the situation, and from the Premier League they say Manchester United, Tottenham and Everton are all chasing him. It’s the 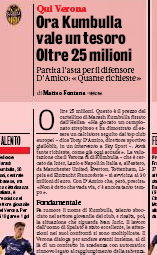 latter two who have been linked the most.

Inter Milan, Lazio, Napoli, RB Leipzig and Eintracht Frankfurt are all also on the chase.

Gazzetta state Hellas Verona are looking for ‘close to €30m’, and want a figure over €25m as a minimum.