It’s been four days since Roger Martinez’s father teased over a Sheffield United transfer, saying he hopes ‘God allows’ his son to move to the Premier League side.

And only now it’s being reported in Mexico that club America are unhappy with the father’s attitude. The story comes from newspaper El Universal.

It’s said the club ‘don’t agree’ that Martinez’s father out saying there’s a ‘verbal agreement’ for the player to join Sheffield United.

Actually a verbal agreement was never mentioned by his dad, but perhaps El Universal are talking about his clear wish of seeing his son moving to the Blades. 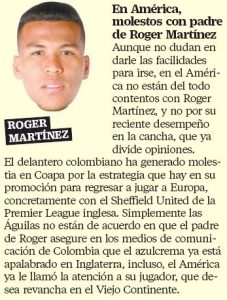 It’s said that Martinez’s performances have been dividing opinion in Mexico, but that’s not the reason why America are mad at him. They don’t like the way he’s handling his potential exit, and called him out for that.

Meanwhile, we keep covering all these stories from the Mexican media saying Martinez could leave the country and join Sheffield United, but we’re still to see concrete reports of the Blades making a bid or even negotiating for the striker’s transfer.