At the weekend, the Liverpool Echo reported Santiago Arias is an option for Everton as they look for competition for Seamus Coleman.

Marcel Brands signed the defender for PSV, and it’s claimed the pair maintain a good relationship.

These claims have quickly been picked up in Spain, with AS looking at things from an Atletico Madrid perspective.

The right back signed for Atletico in the summer 2018 transfer window, and despite getting a good amount of games it’s thought there’s doubts about his future there.

The Rojiblancos would be looking to replace him by signing Nelson Semedo from Barcelona. Even if they don’t manage to pull that transfer off, they have other options. 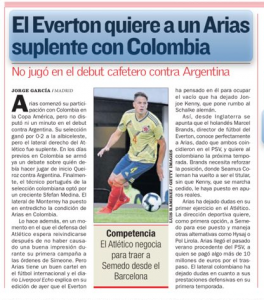 Atletico have doubts about the player’s ‘defensive performance’ last season, and want to replace him, making a move to Everton very possible.

The club paid around €10m a year ago and would likely be looking for at least their money back.