AmkSpor claim Galatasaray are close to signing Manchester United midfielder Marouane Fellaini on a free transfer. Aksam also cover the claims online and say an outline agreement has already been signed ahead of the summer window.

The Turkish newspaper report Galatasaray met with Fellaini’s representatives last month, and according to their information a deal is pretty much sealed.

With the player’s contract with Manchester United set to expire in June, the Belgian can speak to foreign clubs and sign precontract agreement, and it’s reported his agent has been at work doing just that. 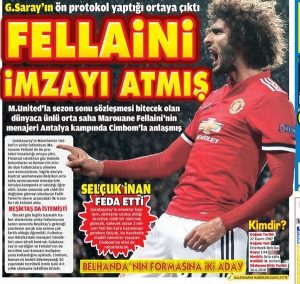 Fellaini had been strongly linked with a move to the Turkish giants in the last summer transfer window, but a deal didn’t materialise because they signed Badou Ndiaye instead.

However, after selling Ndiaye to Stoke City last month for a reported €16m, Galatasaray have yet to find a replacement. Faith Terim wants to see Fellaini in his team for next season so that he can partner him with former Manchester City midfielder Fernando.

The Turkish say recent claims of an agreement with Besiktas started in the English media. Those claims led to a mess of reporting between the English and Turkish media, with them both crediting each other and going around in a circle of nonsense.

These Galatasaray claims stated the Besiktas story isn’t true, and the reality is very different, stating Fellaini has held a preference for Galatasaray.

There’s been so many claims in recent years about Fellaini agreeing a move to Turkey that it’s easy to dismiss them all as nonsense. What we would say is probably true is that there’s widespread Turkish interest in Fellaini, and it seems an agent, not necessarily his, is trying to build a deal.

Nevertheless, these claims sound confident (they always do) and if correct, Fellaini is off to Istanbul in the summer, bringing an end to his Manchester United career.