Slaven Bilić’s second spell in England as a manager came to an end when West Bromwich Albion sacked him on Wednesday.

The Baggies appointed the 52-year-old before the start of the last season, back when they were in the Championship, and the Croatian helped them return to the Premier League this term.

West Brom have managed only one win and accumulated seven points in 13 games this season. They are 19th in the table, two points behind 17th placed Fulham.

After their 1-1 draw against Manchester City on Tuesday, the English side decided to cut ties with the former West Ham United manager and appoint Sam Allardyce as his successor in his stead.

Croatian newspaper Večernji List have covered Bilić’s sacking today, and they look into the timeline of events that occurred before his dismissal.

They state the Baggies didn’t back their former manager with funds to strengthen the squad in the last window, and to make matters worse, West Brom even allowed Ahmed Hegazi Saudi Arabian side Al-Ittihad in October.

Bilić had publicly expressed his frustration and already stated the club never consulted him before sanctioning Hegazi’s loan transfer. 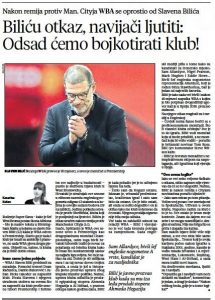 “I wanted Hegazi to stay. He is experienced, a top professional, a quality player and that is why I wanted him to stay. He wanted to stay, but then something happened and he left even though the club assured me he would stay. Its transfer was certainly not my decision,” Bilic said about Hegazi’s move in October.

Večernji List suggest the relationship between Bilić and West Brom broke down after this incident and that’s when ‘probably’ the Premier League side started searching for his replacement, only to appoint Allardyce on Wednesday.