With a contract running out next season, Pierre-Emile Højbjerg is likely living his last few months in a Southampton shirt.

The Denmark international was recently stripped of the captaincy by Ralph Hasenhüttl, as the manager explained he agreed with the player that if he didn’t renew his contract, he wouldn’t lead the team out, with that honour now going to James Ward-Prowse.

That was an extra indicator that the Dane has no intention of staying at St Mary’s longer than he has to, with Tottenham circling around in hope of getting him this summer.

This is what Ekstra Bladet are reporting on Thursday, claiming it is ‘certain’ José Mourinho’s side will be one of the clubs who will ‘try and pick up’ Højbjerg after the season has ended.

However, they point out doing so would be expensive, as the newspaper explain Southampton will require ‘no less than £35m’ to buy out the final year of the midfielder’s contract. 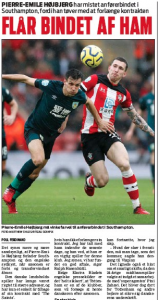 It’s also worth mentioning another club are said to be interested in Everton, who are in dire need of midfield reinforcements for next season.

At £35m, Højbjerg is affordable for most big Premier League clubs, but we’ll have to wait and see who will actually be willing to meet that valuation, as we all know the upcoming transfer window probably won’t be like most others.