They say even though the German side had been asking €20m for a transfer back in January, his price tag should now go down to €12m in the summer.

That’s great news for the Eagles, except for the fact that there’s a big competition for the 23-year-old, with the likes of Tottenham Hotspur, RB Leipzig and Napoli all interested in him.

It’s claimed that the Benfica had offered €15m to land the player in January, but that bid had been turned down by Freiburg. 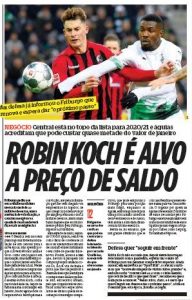 O Jogo says there are two reasons why Koch’s price is going down. The first one is that his contract expires in 2021, and he’s already told his club he’s not signing an extension.

There’s also the fact that Freiburg were expecting the defender to be in German’s squad for Euro 2020, and therefore being valued for that. But with the tournament’s postponement, this isn’t happening in the time they wanted.

There’s no information about how talks with Tottenham or the other clubs have been going, although it’s clear they all have conditions to offer way more than the €12m which is reportedly being demanded.

Belief move to Italy would be to Tottenham player’s ‘liking’ –...

Liverpool specialist coach names best throwers in the team – And...

Tottenham ‘have started talks’ with goalkeeper in case of Hugo Lloris...