Ever since he burst onto the scene at AS Roma, Nicolò Zaniolo has been a target for Tottenham Hotspur.

The London club, whether it was Mauricio Pochettino or José Mourinho at the helm, were constantly linked with a move for the young Italian, and they went as far as putting forward an offer this summer.

That’s what Corriere dello Sport claim on Monday in an article making it clear Roma and their new owners have taken Zaniolo off the market.

According to them, ‘as soon as the transfer of ownership was completed’, the player was considered key to the project and all ideas of a sale were discarded.

So were the four offers from Tottenham, Juventus, Borussia Dortmund and Barcelona for Zaniolo, with every club putting ‘€50m on the table’.

Those bids were ‘returned to sender’ immediately, but Corriere point out it could have been a lot worse. 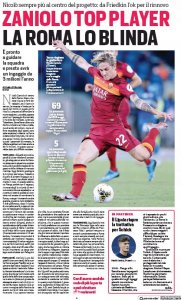 They write Roma were ‘also lucky’ because ‘without Covid’, the offers ‘would have reached €60-70m’, at which point ‘it would have been more difficult to resist.

This appears to open the slimmest of doors, suggesting that if Tottenham can find €10-20m down the back of a sofa somewhere, they might still have a shot.

It’s extremely doubtful, but you never know… We all know money talks.