On Monday, reports from the English press claimed Southampton are interested in signing Florentino Luís from Benfica.

It wasn’t made clear how much the Saints would pay for the midfielder, as it was only pointed out he’d be a replacement for Pierre-Emile Hojbjerg.

Now as the Portuguese press responds to the rumours today, it sounds like it won’t be very easy to take the 21-year-old out of Lisbon.

Newspaper Record writes that Benfica aren’t willing to let Florentino go for less than €45m. Proof that they’re serious about that is rejecting an offer from Fulham of around €30m. 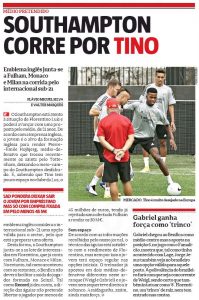 The good news is Florentino Luís isn’t getting a lot of playing time at Benfica. Record claims that manager Jorge Jesus is happy with the player’s form, but still won’t give him a spot in the starting team.

That’s why his departure ‘gains strength’.

Now will someone pay €45m for a player who only made 18 appearances last season? That doesn’t sound very likely, especially at this stage of the transfer window.