Manchester City have been regularly discussed as the favourite destination for Lionel Messi, should he decide against renewing his contract at Barcelona.

The forward’s current deal expires next June and there’s no clarity about his plans beyond this season.

Earlier this week, Messi’s former teammate Neymar expressed his desire to play with the Argentine again and that’s prompted many claims.

The Brazilian’s latest comments have now dragged Paris Saint-Germain into the mix for the 33-year-old.

According to Sport, the six-time Ballon d’Or winner’s ‘peculiar contract situation allows all kinds of speculation’.

There’s a wide range of possibilities and among them is a move to the Etihad. The newspaper states ‘Everything, absolutely everything, is possible.’

Messi continues to maintain silence over his future as he’s aware of having the upper hand due to the time left on his current deal.

Sport states the Argentine will listen to all the offers he will receive, and it could be from from manchester City, PSG, Juventus or renewal offer from Barcelona. Messi will sign one big contract with a ‘great objective’, which is to win trophies and if possible, win one more Champions League medal. 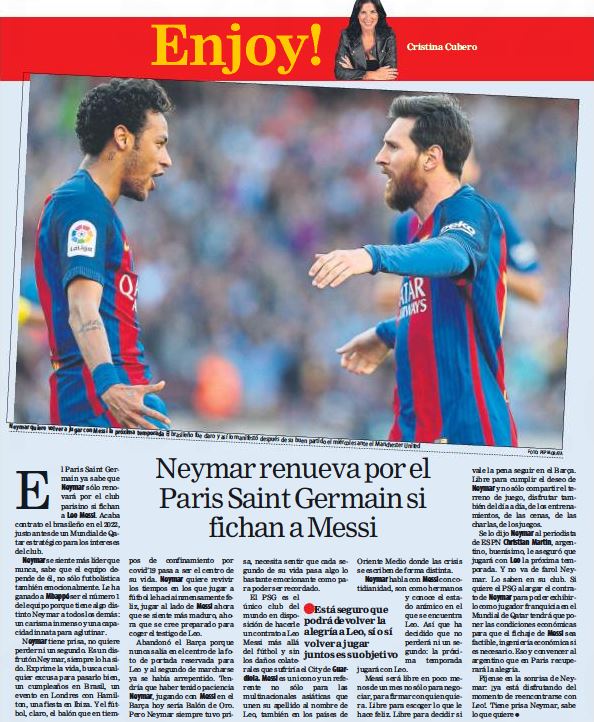 Neymar’s contract at Parc des Princes will run down in 2022. Mundo Deportivo states he will only renew his contract if the Ligue 1 winners sign Messi. These claims are made by journalist Cristina Cubero and she adds the two players are in daily contact.

Cubero states the French champions are aware it’s important to extend the Brazil international’s contract in order to showcase him as their franchise player at the 2022 World Cup in Qatar.

Therefore, PSG will have to set economic conditions to make Messi’s transfer feasible.

According to Cubero, PSG are the only club in the world who are willing to make a contract offer to Messi ‘beyond football’, and ‘without collateral damage’, she states Pep Guardiola’s City ‘would suffer’.