Turkish newspaper Fotomac report Birmingham City have made an approach for Fenerbahce defender Zanka, after being linked with the Dane in recent days.

The central defender spent last season on loan at FC Copenhagen where he impressed with his performances. His return to form has reportedly caught the eye of Birmingham City, and according to Fotomac an offer has come in from the Blues. 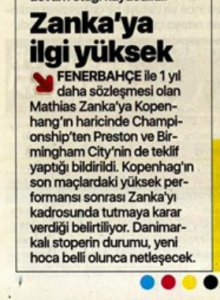 Fenerbahce signed Zanka from Huddersfield Town in 2019 but after some poor performances he was loaned out to Fortuna Dusseldorf and then FC Copenhagen.

Whilst with FC Copenhagen Zanka has managed to get his career back on track and Fotomac report Fenerbahce are looking to sell him. It’s claimed the Turkish club are willing to wait until the end of Euros to make a final decision over the player, but it seems his time in Istanbul is coming to and.

Zanka’s contract with the Yellow Canaries will expire at the end of next season.