Home Europe With claim Mourinho has ‘reserved’ player, and Man United in talks to...
SHARE

Anderson Talisca’s agent is not very keen on feeding the rumours of a Manchester United transfer.

Loaned by Benfica to Besiktas until the end of the season, the midfielder will stay in Turkey if his new club activate the buying option (just over €20m), and that’s why his representative doesn’t believe he’s going elsewhere.

A Bola reported on Wednesday that Jose Mourinho has ‘reserved’ Talisca and talks are ongoing for a move to Old Trafford which could be worth €40m.

Carlos Leite has spoken to Portuguese newspaper Record for their Thursday edition, and claimed he hasn’t held any talks with the Red Devils for now.

“I’m not aware of any interest from Manchester United in Talisca. Neither I nor the player. If there’s anything between clubs, it’s something else. But one thing is certain: I, who am the agent of the player, did not speak to anyone.

“In fact, until the end of the season, we will absolutely not do anything with any other club other than Besiktas,” Carlos Leite told Record.

“The Turkish have a buying option that needs to be respected. Until then, it makes no sense for me or the athlete to talk to anyone or hit any other scenario. If Besiktas activate the option, he will be their player.” 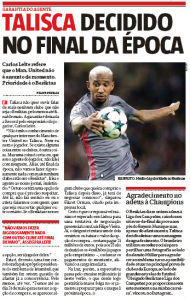 On the other hand, Besiktas are having a tough process to guarantee the signing. Club president Fikret Orman has been speaking to the local press saying the player must also accept the transfer, otherwise their activation of the buying clause would be for nothing. Meanwhile, they negotiate a smaller fee with the Portuguese club.

As we explained yesterday, part of these rumours looks to come from Benfica, who are making pressure for Besiktas to pay the full amount. With other clubs such as Wolves and Liverpool being linked, the Turkish side should certainly feel like they better hurry and get him for the price set in the contract.

But if Talisca’s agent continues to deny the rumours in the Portuguese press, it will get hard for Benfica to convince Besiktas that there are other clubs interested.