Having arrived at Old Trafford late in the last summer window, Alex Telles hasn’t had much prominence in his first season at Manchester United.

The left-back has been restricted to only eight league starts and managed 12 more starts in other competitions for the Red Devils.

Luke Shaw’s form has forced the Brazil international to settle for a back-up role with the Premier League side.

Portuguese newspaper Record now claim the 28-year-old has failed to establish himself in England, which is why he will be made available on the market. 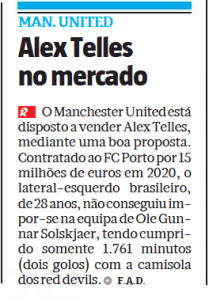 summer, but they will ‘need a good offer’ to sanction his exit.

Manchester United spent €15m to acquire his services last summer and offered him a contract until 2024.

Although Record says the English club are ‘ready to sell’ Telles, they don’t specify what constitutes a ‘good offer’.

This sounds like Manchester United being willing to consider Telles’ future should someone provide an opportunity to make a good profit.