Manchester United have placed a bid for the signing of Benfica star Darwin Nunez, according to claims from the Portuguese media today.

Correio da Manhã says the Red Devils put an offer worth a total of €105m on the table.

It’s said emissaries from the Old Trafford side were recently in Lisbon to present those terms, which were ‘financial engineering’ to reach the three digits.

The bid is said to be of €75m initially, plus €20m in easily achievable bonuses in the medium term. The other €10m is said to be related to the loan of a Manchester United player who’s worth that much. The first name suggested to Benfica, according to Correio, was Andreas Pereira. 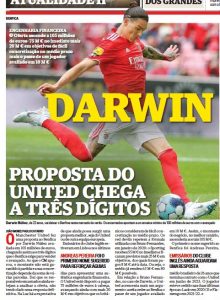 The newspaper claims that even though Benfica demanded €100m+ to let Darwin Nunez go this summer, it’s still not guaranteed that they’ll accept this bid, as the club will still analyse it.

At the Lisbon side, there’s expectation for a better offer, which could come from another club or even from United themselves.

The Red Devils now sit and wait for Benfica’s response.