Friday’s edition of AS claims Manchester United are ‘seriously considering’ the option of letting Paul Pogba leave in the summer.

Ed Woodward recently made clear he feels things will be difficult for clubs over the coming months, given the financial implications of Covid-19.

With the midfielder wanting to leave the club and Mino Raiola trying to get his client away from Old Trafford, everything indicates his sale seems to be the ‘best solution’.

The Premier League side wanted in excess of €150m for the World Cup winner last summer. AS state Pogba’s current worth is not more than €100m, especially after his recent injury record and the Covid-19 crisis.

Real Madrid have been credited with an interest in the Frenchman and Zinedine Zidane ‘still loves’ his compatriot.

Another snippet from the same publication suggests that out of the La Liga club’s summer targets, Pogba’s signing remains the most complicated one. In addition to this, Florentino Pérez thinks he’s too expensive. 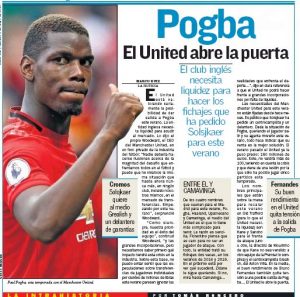 Rennes’ Eduardo Camavinga is also a target for Real Madrid and AS adds Zidane’s side must decide between the teenager and the former Juventus man.

Although United ‘open the door’ for the star’s exit, it’s unclear if the potential suitors are ready to spend big to land Pogba.

Unless that changes, he’s going nowhere.