There’s some rather interesting news in Gazzetta dello Sport on Thursday as they detail what’s holding up Alexis Sánchez’s exit from Manchester United.

Don’t worry too much, because they still think the Chile international will eventually end up moving to Inter before the end of the transfer window, explaining he’s only ‘one step away’ from putting on their shirt, but it’s not quite done yet.

Most of the details are sorted, but it’s believed United are, for now, holding back on giving the green light for the official announcement as they are pondering whether to replace Sánchez or not if he leaves.

Their pool of players is obviously rather limited, and while Daniel Sturridge, who previously played for Manchester City and Liverpool (among others), has moved to Trabzonspor in Turkey, Fernando Llorente is still a free agent.

In fact, Gazzetta dello Sport claim those in charge at Manchester United have ‘contacted’ the Spaniard and offered him a two-year contract. 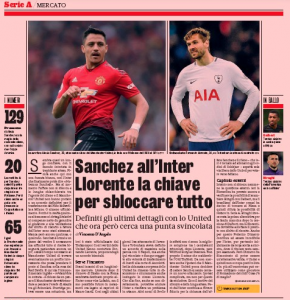 The former Tottenham player would offer some depth up front, as Sánchez’s exit would leave Ole Gunnar Solskjaer rather light in the department, as well as give them a different plan of attack if the fluid system involving the likes of Marcus Rashford, Anthony Martial and whoever he feels like playing down the right doesn’t work.

It’s not the craziest of ideas, and one the club clearly have been exploring since they reportedly tried to sign Mario Mandzukic from Juventus towards the end of the transfer window.

There’s also a mention that Wilfried Bony is a free agent too, but we’ll just ignore that because if it does happen, we’re pretty sure United fans will march down Sir Matt Busby Way and burn down Old Trafford.

And no one wants that.